Free delivery on all orders over $99 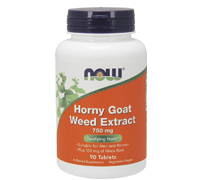 According to Chinese this clears the body from weariness and increases energy level while nervous stimulation is enhanced as the brain is supplied with hormone-enriched blood.

Although Epimedium has been successfully applied in treatments for disorders of the liver, kidneys, joints, knees and back, it was mainly used as an aphrodisiac in Asian medicine.

Can't subscribe you right now. Try later
Thank you for subscribing to the newsletter! We hope you enjoy shopping at Popeye's Canada